Protecting your pets from Heartworm disease in Ontario

Heartworm is a serious and potentially fatal condition caused by parasitic worms that live in the heart, and blood vessels that supply blood to the lungs of infected animals.

Pets can contract heartworm disease from mosquitoes that are infected with heartworm parasites. When an infected mosquito bites an uninfected dog, it injects the immature worms into the tissue of the animal through its saliva.

Once injected, the immature worms develop, migrating to the lungs and potentially the heart, where they mature into adults and begin to reproduce. These worms can grow to a length of 15-30 centimetres, and in severe cases a dog may be infested with hundreds of worms. Mature worms produce thousands of larvae that can then be spread to other dogs or cats by mosquitoes.

The infestation can result in damage to the heart, lungs and liver. The pet may die as a result of severe damage to the internal organs.

Heartworm is a disease that poses a serious threat to pets in Canada and the United States, and especially to dogs. The good news is that it can be easily prevented through regular testing and the use of preventive medication.

What you need to know about Heartworm disease in Ontario

A study on “Heartworm in dogs in Canada in 2010” published by the Ontario Veterinary College’s Department of Pathobiology at the University of Guelph has revealed a 60 per cent increase in the number of dogs in Ontario with heartworm since the last study of its kind was conducted in 2002.

How Heartworm Happens: The Life Cycle 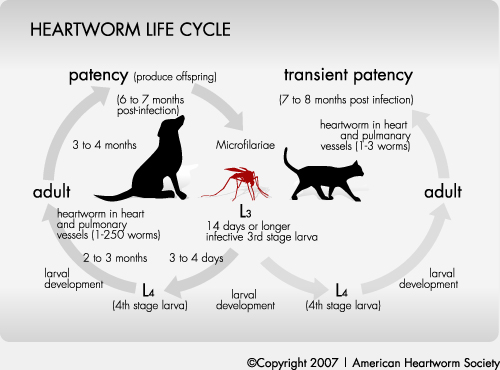 Without regular testing, heartworm disease is usually only detected after the disease has progressed, in which case irreversible damage may have already been done to the internal organs. In advanced cases, clinical symptoms may include: general listlessness, a chronic cough, laboured breathing, and weight loss. The animal may also tire easily during exercise and could collapse due to heart failure.

In some cases, pets will not show clinical signs even though that may be hosting one or two adult worms, but internal damage is still being done and most of these dogs are still infectious.

What happens if my pet tests positive for Heartworm?

Treatment for heartworm disease is available, but it is costly and is not without dangers. Treatment involves a series of injections to kill the adult worms, and then a treatment to kill the immature worms in the bloodstream.

Prevention is the key

Heartworm can be easily prevented in Ontario. Your veterinarian will begin by examining a sample of your dog (or cats) blood for the presence of adult parasites. This is typically done between April 15th – June 1st. If your dog is not infected and depending on the risk of infection, a preventive program should be started. The preventive program involves giving the dog a pill or applying a solution to the skin once a month during mosquito season, which (in Ontario) typically runs from June to November. This medication destroys the immature heartworms transmitted by the mosquitoes and stops the cycle of the parasites.

Heartworm will never be completely eliminated because it exists in the wild animal population and cannot be fully controlled. This will, unfortunately, act as another source of infection for the pet population. Preventive programs should not be started before your dog has been tested for the presence of heartworm infection by your veterinarian. Pet owners who vacation in the United States with their dogs should consult their veterinarian regarding the best way to provide continual protection against this easily preventable disease. Heartworm is an epidemic in some areas of the States.

As veterinarians, we get asked many questions about this parasite and how to prevent it. The most common questions are reviewed below.

Q. My pet was on heartworm medication throughout the last mosquito season. Why do I need to have my pet tested for heartworm this year?

Of the 564 dogs that tested positive for heartworm in Ontario in 2010, more than 80 per cent were not on any kind of preventive treatment. In cases where preventive treatment appeared to have failed, owners reported that they had forgotten doses or that their pet had refused to take a dose. By testing your dog regularly, you increase the chance of detecting the disease early, before serious damage is done to your pet’s heart or lungs and while prognosis for treatment is still good. Also, depending on the type of heartworm preventive medication used, if given to a dog already infected with heartworm, a mild to severe allergic reaction may occur. For this reason, most heartworm preventive medications are prescription products. Annual testing is more important than ever.

Q. How prevalent is heartworm in Ontario? Do I really need to worry about it in my pet?

The actual number of heartworm positive pets in Ontario varies from year to year. While there is currently no system in place to track every case of heartworm in the province, a survey conducted in 2010 found that the number of dogs with heartworm in Ontario increased by 60% between 2002 and 2010. Of the dogs that tested positive for heartworm in Canada, nine per cent of them were confirmed as having been imported from the Southern United States (Katrina dogs) and 12 per cent had been imported from other parts of the United States or other countries. Fifty-one per cent had never left their local area.

The take home message is that Ontario pets are vulnerable from a variety of sources, and prevention is the best approach.

Q. Why does my pet need preventative medication? Why not just treat the disease if my pet develops heartworm?

The signs of heartworm disease are usually only detectable after the disease has progressed and damage has already been done to the internal organs, which may be irreversible. Although treatment for heartworm disease is available, it is costly and is not without dangers. Waiting for symptoms to develop is not a realistic alternative to prevention, nor is it particularly ethical.

Q. If my dog is always indoors and never gets bitten by a mosquito, does it need a heartworm prevention program?

Mosquitoes are a fact of life during the summer months in Ontario, and we have yet to see an effective method of avoiding all contact with the insect. Remember – it only takes one mosquito bite to infect a dog with heartworm.

Other Resources for Heartworm:

To see what heartworm looks like in an infected animal, visit http://www.youtube.com/watch?v=VOLzFsNOJ-4&feature=player_embedded